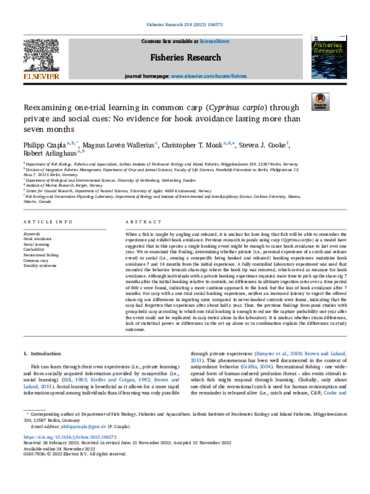 When a fish is caught by angling and released, it is unclear for how long that fish will be able to remember the experience and exhibit hook avoidance. Previous research in ponds using carp (Cyprinus carpio) as a model have suggested that in this species a single hooking event might be enough to cause hook avoidance to last over one year. We re-examined this finding, determining whether private (i.e., personal experience of a catch-and-release event) or social (i.e., sensing a conspecific being hooked and released) hooking experiences maintains hook avoidance 7 and 14 months from the initial experience. A fully controlled laboratory experiment was used that recorded the behavior towards sham-rigs where the hook tip was removed, which served as measure for hook avoidance. Although individuals with a private hooking experience required more time to pick up the sham rig 7 months after the initial hooking relative to controls, no differences in ultimate ingestion rates over a time period of 600 s were found, indicating a more cautious approach to the hook but the loss of hook avoidance after 7 months. For carp with a one-trial social hooking experience, neither an increased latency to ingest the offered sham rig nor differences in ingesting rates compared to never-hooked controls were found, indicating that the carp had forgotten that experience after about half a year. Thus, the previous findings from pond studies with group-held carp according to which one-trial hooking is enough to reduce the capture probability one year after the event could not be replicated in carp tested alone in the laboratory. It is unclear whether strain differences, lack of statistical power or differences in the set up alone or in combination explain the differences in study outcomes.