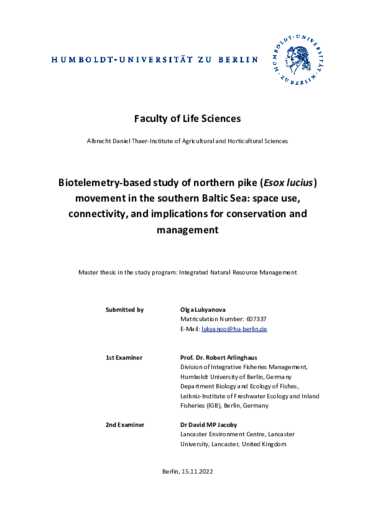 Knowledge of the interactions between target species and their habitat, both spatially and temporally, is important for informing management and conservation actions. Here, acoustic telemetry, network analysis and spatial conservation prioritization were used to explore spatial and seasonal space use and movement patterns of northern pike (Esox lucius), a freshwater fish that also inhabits low-salinity areas, such as the coastal brackish lagoons bordered by German islands of Fischland-Darß, Hiddensee, Rügen and Usedom in the southern Baltic Sea. It was then assessed to what extent existing spatial management and conservation measures in the area were aligned with pike behavioural patterns. Pike were primarily resident and showed little movement between different lagoons for most of the year, except during the spring spawning season when movement increased markedly. Most of the individuals monitored during both spawning seasons showed fidelity to the spawning grounds and were observed during both years’ spawning in the same areas. From an administrative standpoint, it was shown that the majority of pike remained in the same fishing district throughout the year and that existing no-take protected areas were used to varying degrees: in three of them, pike were found all year round in higher numbers than expected at random, while many others were used more intensively only seasonally. Identification of optimal areas for pike protection showed that while existing protection measures cover some areas where pike occurred both year-round and during the spawning season, closures of more areas may be necessary to ensure sufficient conservation.