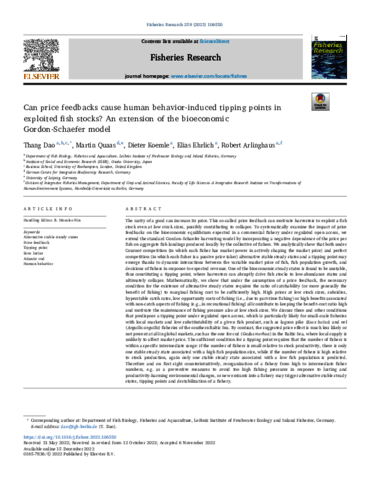 The rarity of a good can increase its price. This so-called price feedback can motivate harvesters to exploit a fish stock even at low stock sizes, possibly contributing to collapse. To systematically examine the impact of price feedbacks on the bioeconomic equilibrium expected in a commercial fishery under regulated open access, we extend the standard Gordon–Schaefer harvesting model by incorporating a negative dependence of the price per fish on aggregate fish landings produced locally by the collective of fishers. We analytically show that both under Cournot competition (in which each fisher has market power in actively shaping the market price) and perfect competition (in which each fisher is a passive price taker) alternative stable steady states and a tipping point may emerge thanks to dynamic interactions between the variable market price of fish, fish population growth, and decisions of fishers in response to expected revenue. One of the bioeconomic steady states is found to be unstable, thus constituting a tipping point, where harvesters can abruptly drive fish stocks to low-abundance states and ultimately collapse. Mathematically, we show that under the assumption of a price feedback, the necessary condition for the existence of alternative steady states requires the ratio of catchability (or more generally the benefit of fishing) to marginal fishing cost to be sufficiently high. High prices at low stock sizes, subsidies, hyperstable catch rates, low opportunity costs of fishing (i.e., due to part-time fishing) or high benefits associated with non-catch aspects of fishing (e.g., in recreational fishing) all contribute to keeping the benefit-cost ratio high and motivate the maintenance of fishing pressure also at low stock sizes. We discuss these and other conditions that predispose a tipping point under regulated open access, which is particularly likely for small-scale fisheries with local markets and low substitutability of a given fish product, such as lagoon pike (Esox lucius) and eel (Anguilla anguilla) fisheries of the southern Baltic Sea. By contrast, the suggested price effect is much less likely or not present at all in global markets, such as the one for cod (Gadus morhua) in the Baltic Sea, where local supply is unlikely to affect market price. The sufficient condition for a tipping point requires that the number of fishers is within a specific intermediate range: if the number of fishers is small relative to stock productivity, there is only one stable steady state associated with a high fish population size, while if the number of fishers is high relative to stock production, again only one stable steady state associated with a low fish population is predicted. Therefore and on first sight counterintuitively, reorganization of a fishery from high to intermediate fisher numbers, e.g. as a preventive measures to avoid too high fishing pressures in response to lasting and productivity-harming environmental changes, or new entrants into a fishery may trigger alternative stable steady states, tipping points and destabilization of a fishery.