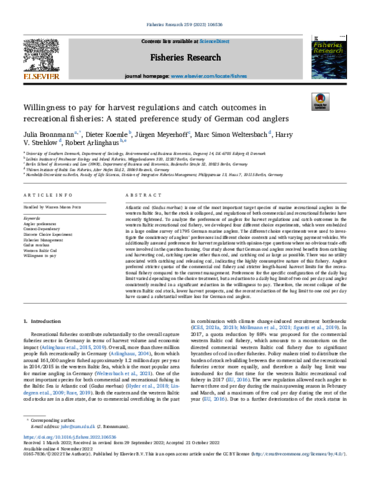 Atlantic cod (Gadus morhua) is one of the most important target species of marine recreational anglers in the western Baltic Sea, but the stock is collapsed, and regulations of both commercial and recreational fisheries have recently tightened. To analyze the preferences of anglers for harvest regulations and catch outcomes in the western Baltic recreational cod fishery, we developed four different choice experiments, which were embedded in a large online survey of 1795 German marine anglers. The different choice experiments were used to investigate the consistency of anglers’ preferences in different choice contexts and with varying payment vehicles. We additionally assessed preferences for harvest regulations with opinion-type questions where no obvious trade-offs were involved in the question framing. Our study shows that German cod anglers received benefits from catching and harvesting cod, catching species other than cod, and catching cod as large as possible. There was no utility associated with catching and releasing cod, indicating the highly consumptive nature of this fishery. Anglers preferred stricter quotas of the commercial cod fishery and stricter length-based harvest limits for the recreational fishery compared to the current management. Preferences for the specific configuration of the daily bag limit varied depending on the choice treatment, but a reduction to a daily bag limit of two cod per day and angler consistently resulted in a significant reduction in the willingness to pay. Therefore, the recent collapse of the western Baltic cod stock, lower harvest prospects, and the recent reduction of the bag limit to one cod per day have caused a substantial welfare loss for German cod anglers.