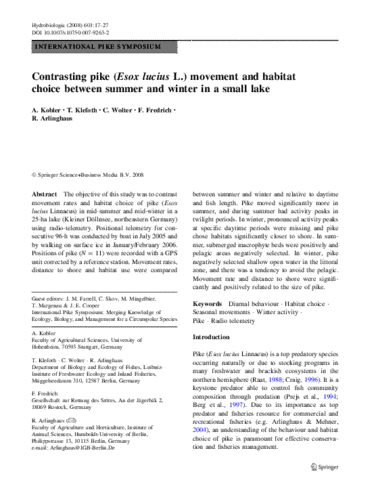 The objective of this study was to contrast movement rates and habitat choice of pike (Esox lucius Linnaeus) in mid-summer and mid-winter in a 25-ha lake (Kleiner Döllnsee, northeastern Germany) using radio-telemetry. Positional telemetry for consecutive 96-h was conducted by boat in July 2005 and by walking on surface ice in January/February 2006. Positions of pike (N = 11) were recorded with a GPS unit corrected by a reference station. Movement rates, distance to shore and habitat use were compared between summer and winter and relative to daytime and fish length. Pike moved significantly more in summer, and during summer had activity peaks in twilight periods. In winter, pronounced activity peak sat specific daytime periods were missing and pike chose habitats significantly closer to shore. In summer, submerged macrophyte beds were positively and pelagic areas negatively selected. In winter, pike negatively selected shallow open water in the littoral zone, and there was a tendency to avoid the pelagic. Movement rate and distance to shore were significantly and positively related to the size of pike.