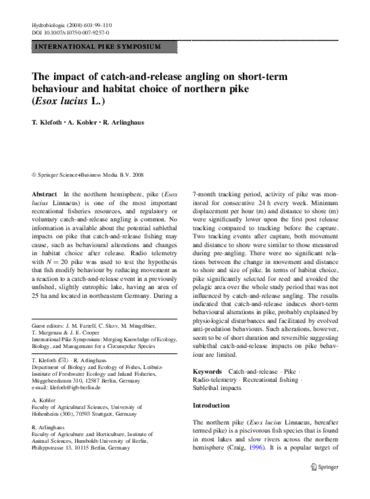 In the northern hemisphere, pike (Esox lucius Linnaeus) is one of the most important recreational fisheries resources, and regulatory orvoluntary catch-and-release angling is common. No information is available about the potential sublethal impacts on pike that catch-and-release fishing may cause, such as behavioural alterations and changes in habitat choice after release. Radio telemetry with N = 20 pike was used to test the hypothesis that fish modify behaviour by reducing movement as a reaction to a catch-and-release event in a previously unfished, slightly eutrophic lake, having an area of 25 ha and located in northeastern Germany. During a 7-month tracking period, activity of pike was monitored for consecutive 24 h every week. Minimum displacement per hour (m) and distance to shore (m) were significantly lower upon the first post release tracking compared to tracking before the capture. Two tracking events after capture, both movement and distance to shore were similar to those measured during pre-angling. There were no significant relations between the change in movement and distance to shore and size of pike. In terms of habitat choice,pike significantly selected for reed and avoided the pelagic area over the whole study period that was not influenced by catch-and-release angling. The results indicated that catch-and-release induces short-term behavioural alterations in pike, probably explained by physiological disturbances and facilitated by evolved anti-predation behaviours. Such alterations, however, seem to be of short duration and reversible suggesting sublethal catch-and-release impacts on pike behaviour are limited.