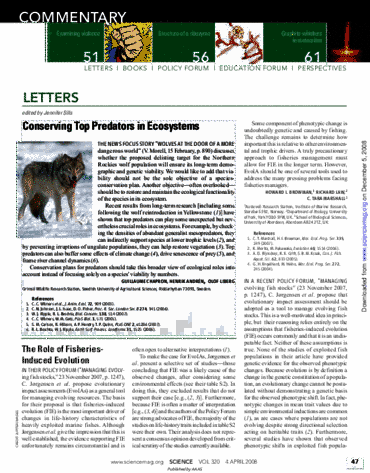 In their Policy Forum ("Managing evolving fish stocks,” 23 November 2007, p. 1247), C. Jørgensen et al. propose evolutionary impact assessments (EvoIAs) as a general tool for managing evolving resources. The basis for their proposal is that fisheries-induced evolution (FIE) is the most important driver of changes in life-history characteristics ofheavily exploited marine fishes. Although Jørgensen et al. give the impression that this is well established, the evidence supporting FIE unfortunately remains circumstantial and is often open to alternative interpretations (1). To make the case for EvoIAs, Jørgensen et al. present a selective set of studies—those concluding that FIE was a likely cause of the observed changes, after considering some environmental effects (see their table S2). In doing this, they excluded results that do not support their case [e.g., (2, 3)]. Furthermore, because FIE is often a matter of interpretation [e.g., (3, 4)] and the authors of the Policy Forum are strong advocates of FIE, the majority of the studies on life-history traits included in table S2 were their own. Their analysis does not represent a consensus opinion developed from critical scrutiny of the studies currently available. Some component of phenotypic change is undoubtedly genetic and caused by fishing. The challenge remains to determine how important this is relative to other environmental and trophic drivers. A truly precautionary approach to fisheries management must allow for FIE in the longer term. However, EvoIA should be one of several tools used to address the many pressing problems facing fisheries managers.