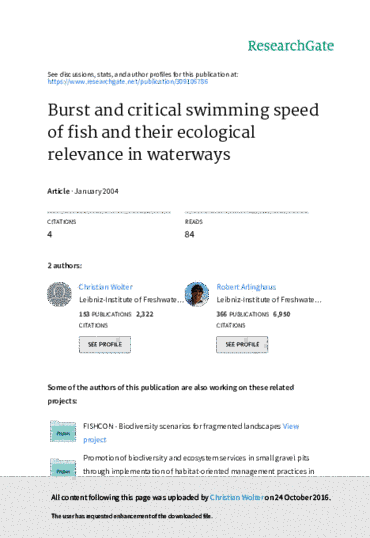 A total of 168 swimming performance studies for 75 freshwater fish species were compiled with the aim of characterising the absolute swimming performance of fish as a prerequisite (1) to spatially analyse distribution pattern, age and size structure of fish assemblages in river systems, and (2) to predict impacts on fish resulting from human alterations of hydrodynamics. It was hypothesized that swimming performance is a crucial factor for the habitat use in freshwater ecosystems characterized by pulsed perturbations or unsteady flows resulting from navigation or related hydrodynamic impacts. Models regressing total length on burst and critical swimming speeds were highly significant. According to theses models, a swimming speed of 1.0 m s-1 will be maintained by a 56 mm long fish in the burst mode (maximum duration until fatigue 20 s). No significant differences in burst swimming performance were detected between small-sized individuals of cyprinids, salmonids and other taxonomic orders. In the critical swimming mode (up to 1 h until fatigue), the same speed (1.0 m s-1) will be reached by a 133 mm long cyprinid, a 179 mm fish in general, or a 201 mm salmonid fish. In this prolonged mode, rheophilic cyprinids performed significantly better than salmonids or other fish. In restricted inland waterways, moving vessels typically induce return currents of 0.7-1.1 m s-1 and dynamic flow patterns acting along the shoreline. The gap between the maximum swimming ability of newly hatched fish ranging between 0.06-0.2 m s-1, and the navigation-induced physical threshold (0.7 m s-1) maintained by a 42 mm long fish in the burstmode and by a 71 mm long fish in the critical mode, led to the inference of the navigation-induced habitat bottleneck hypothesis (NBH). According to the NBH, the restricted availability of essential nurseries for early fish lifestages resulting from their limited swimming performance is the major bottleneck for fish recruitment in waterways. The models of burst and critical swimming speed introduced here can help to establish appropriate management options aiming at sustaining fish biodiversity in highly modified water bodies.