Welcome to the BODDENHECHT project

BODDENHECHT (bodden pike) is an inter- and transdisciplinary research project funded by the EU and the state of Mecklenburg-Vorpommern, which scientifically investigates the pike (Esox lucius) in the Baltic Sea lagoons (so-called Bodden) around the island of Rügen.

What is it about?

Northern pike is a widespread top predator of freshwater across North America and Eurasia, which can also colonise and reproduce in low-salinity areas. And is one of the most popular angling fish in Germany. The slightly saline Baltic sea lagoons (so called Boddens) offer excellent feeding conditions for pike. According to available knowledge, pike reproduction is successful up to a salinity of 10 per mille, which limits the distribution of pike as a freshwater fish to the inner coastal waters around Island of Rügen. In the productive Bodden ecosystems, pike grow to astonishing sizes. Other saltwater-tolerant freshwater predatory fish species are also common in the Boddens, for example zander or perch. Due to the abundance of fish and the high productivity, the Bodden waters are of great importance for local anglers, angling tourists as well as for commercial fishing. At the same time, there are fears that increasing fishing exploitation as well as environmental change will influence the productivity, stocks and sizes of the pike populations. However, there are hardly any reliable data on the development of the Bodden pike and their fishery use.

We are a team of young researchers. Our goal is to gain a better understanding of the Bodden pike and their fisheries by combining fisheries biology with social and economic science approaches (interdisciplinary research). We see ourselves as providers of scientific knowledge about the Bodden pike. Building on these facts, the next step is for anglers, guides and professional fishermen in a joint working group to identify viable, generally accepted management and tourism options for the conservation and promotion of the Rügen pike stocks (transdisciplinary implementation).

BODDENPIKE is a practical project by "fishers for fishers". We as independent fisheries scientists as well as representatives of fisheries (commercial fishermen and anglers), angling tourism (especially guides) and fisheries management work hand in hand to investigate the main factors influencing Bodden pike stocks, analyse migratory movements, localise spawning areas and identify management options that are acceptable to all parties.

The overall project goal is to better understand the pike in the Bodden waters of Mecklenburg-Vorpommern and to promote them more effectively in the future. We, the scientific team BODDENHECHT, see ourselves primarily as independent providers of scientific data and facts on pike and pike fishing. In addition, we want to bring all stakeholders - fishers, anglers and guides - into dialogue with each other at eye level in order to jointly find ways to conserve and develop pike stocks for commercial fishing, angling and tourism in the long term.

Together with all stakeholders, we seek answers to the following questions:

How do we proceed?

Where exactly?
The study area are the Baltic Sea lagoons (bodden) around the island of Rügen, with the main focus on the areas of Jasmunder Bodden, western Rügen around Schaprode, Kubitzer Bodden and Strelasund, Greifswalder Bodden and in parts Peenestrom and the bodden chain of Darß-Zingst.

Who are the project participants?

A further research partner is the Institute of Fisheries of the Mecklenburg-Vorpommern State Research Centre for Agriculture and Fisheries (Carsten Kühn) in Rostock.

In addition, a number of national and international cooperation partners as well as a large number of fishermen, anglers and guides are working in the project.

The BODDENHECHT project (MV-I.18-LM-004, EU funding programme 7301, project duration 01.01.2019 - 30.06.2023) is funded to 75 % by the EU, from resources of the European Maritime and Fisheries Fund (EMFF), and to 25 % from national funds by the State of Mecklenburg-Vorpommern (Ministry of Agriculture and Environment Mecklenburg-Vorpommern). 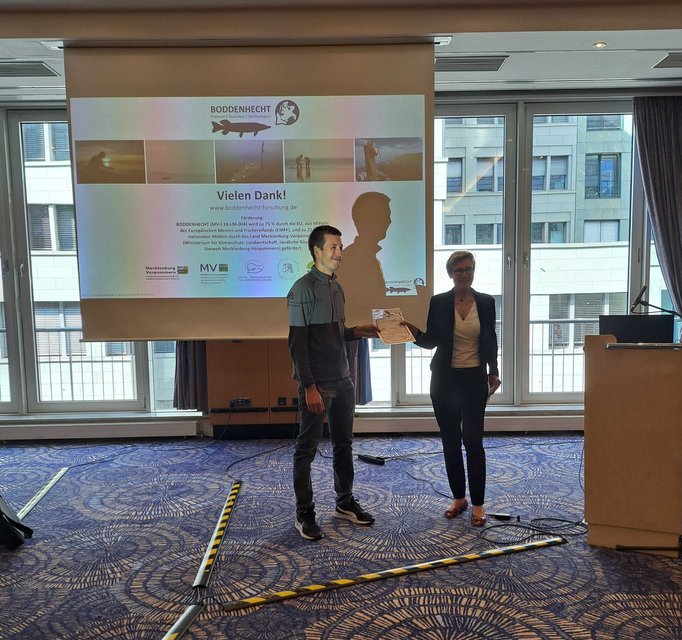