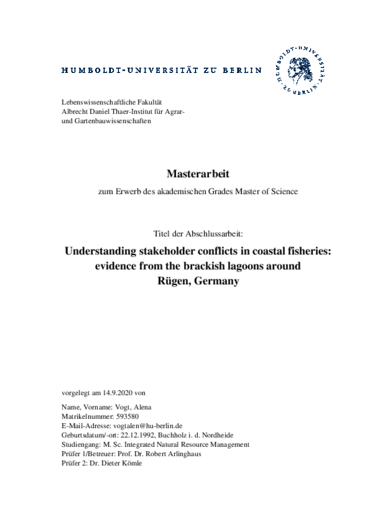 Conflict is a common phenomenon in fisheries systems, particularly when co-exploited by different user groups (e.g. recreational and commercial fishers). As unsolved disputes can impede sustainability progress, fisheries management has the task of identifying, understanding and addressing conflict. Yet, the human dimensions and particularly conflict resolution have often been neglected in the management of commercial-recreational fisheries. An example for the urge of an adequate conflict management is the brackish inshore coast of the southern Baltic Sea in Germany. This fishery is characterized by shallow oligo- to mesohaline, eutrophic to polytrophic lagoons that form a unique and highly productive habitat where freshwater predators such as pike (Esox lucius) are prime targets. Traditionally exploited by commercial fishers, recreational fishing has recently gained importance and a guiding sector has emerged. Additionally, the area is important for conservation. The aim of this study is to describe stakeholder perceptions regarding conflict at the fishery. Interviews with key stakeholder groups (commercial and recreational fishers, administration, eNGOs, scientists etc.) were conducted and analyzed using a qualitative conflict model to identify the main variables fostering conflict. Results indicate that conflict exists between numerous stakeholder groups, particularly among recreational and commercial fishers as well as between fishing interests and nature conservation. The analysis suggests that divergent understandings of the ‘appropriate’ resource use, issues of distributive justice, variation in resource dependence and lifestyle tolerance as well as insufficient structured communication between groups contribute to the conflicts. The interview material reveals that particularly conflicts between user groups are characterized by deep prejudices about the outgroup and destructive conflict behavior. To prevent a further entrenchment of conflicts, I recommend that management should dismantle communication barriers and foster a fact-based dialogue. Conflict management may thus contribute to ensuring long-term effective governance while aligning the interests of its stakeholders.