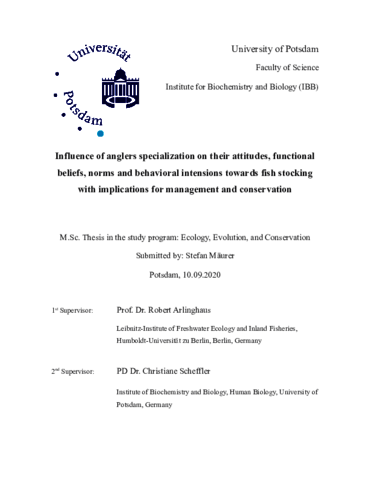 Fish stocking is used by German fishing clubs as a primary measure to regulate fish stocks and entails far-reaching interventions in aquatic ecosystems. These measures are carried out by the executive boards of the clubs, in particular fishery managers, who in turn are influenced by their club members. The aim of this study was to investigate the influence of different characteristics of anglers on their knowledge, beliefs, attitudes and behavioural intentions regarding fish stocking. For this purpose, data was collected from surveys sent to anglers in selected clubs in Lower Saxony (n = 2483) and indices for measuring characteristics such as specialisation, catch orientation, education and demographics, as well as indices for describing psychological disposition in terms of knowledge, beliefs, norms, attitude and intentions regarding fish stocking were established. The anglers were divided into five groups according to their target fish species. Using target-species specific ordinal regression the relationship of angler characteristics, such as specialization, and the beliefs, attitudes, norms and intentions related to stocking was assessed. More educated anglers were more likely to doubt the previous stocking practices and less likely to believe in a positive effect of stocking. A stronger orientation towards catch and fish consumption led to increased support for fish stocking, while the opposite was true for catch-and-release anglers. The relationship to fish stocking was also dependent on the target species and different specialisation indicators, with more specialised anglers generally supporting stocking more strongly. More specialized anglers did not have more knowledge about functionality and eco-genetic risks of stocking than less specialized ones. A significant difference between anglers with target species of different types (culture-based stocking vs. stock-enhancement type stocking based on naturally recruiting species) was found with respect to their stocking intentions: More (behavioral) committed anglers of stock-enhancement species showed an intention to reduce fish stocking, while more (behavioral) committed anglers of culturebased stocking species disliked the reduction of stocking. Not only did an angler's club position have no effect on his relationship to fish stocking compared to normal members, but anglers in such a position saw fish stocking as a more effective measure to regulate fish stocks than angling or harvest restrictions. In most cases, the age of an angler had a great influence on the psychological disposition regarding fish stocking and it seemed that there is an intention among older people, based on many years of personal experience, to maintain the previous stocking practices. The conclusion is that the target species, specialisation, catch orientation and education all affected the knowledge, beliefs and attitudes towards fish stocking. The positive relationship of angler specialization and stocking support challenges earlier literature statements and suggests that the support for stocking may increase with specialization. As more specialized anglers are more likely to take over managerial roles in clubs, the findings of this study suggest that a strong support for stocking is to be expected in many clubs by design. It is therefore adviseble to involve anglers in joint experiments, especially younger individuals, as their beliefs and norms have not yet become strongly established and are thus easier to change, which might overall lead to a general change in anglers' relationship towards fish stocking.