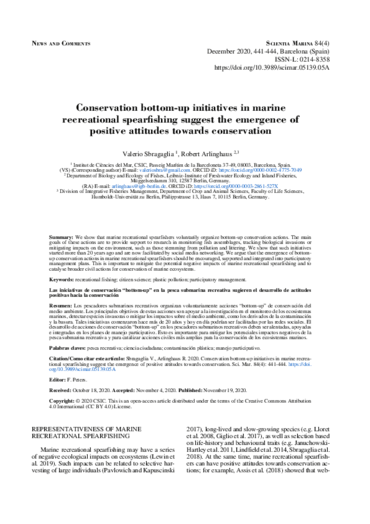 We show that marine recreational spearfishers voluntarily organize bottom-up conservation actions. The main goals of these actions are to provide support to research in monitoring fish assemblages, tracking biological invasions or mitigating impacts on the environment, such as those stemming from pollution and littering. We show that such initiatives started more than 20 years ago and are now facilitated by social media networking. We argue that the emergence of bottom-up conservation actions in marine recreational spearfishers should be encouraged, supported and integrated into participatory management plans. This is important to mitigate the potential negative impacts of marine recreational spearfishing and to catalyse broader civil actions for conservation of marine ecosystems.