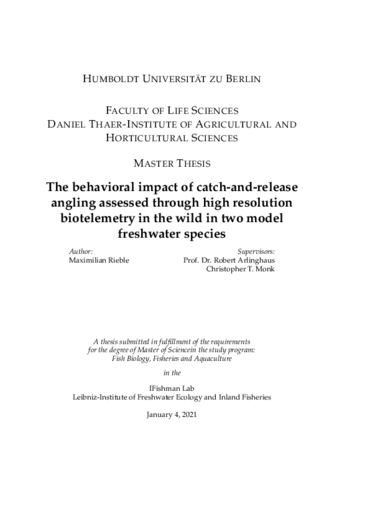 Catch-and-release (CR) angling is a widespread practice, but there is no scientific consensus about its consequences on fish behaviour or mortality. Many studies on CR impacts were conducted in laboratory or other artificial settings, which may inflate CR impacts relative to studies in the wild. Species-specific investigations in situ are necessary to understand how to minimise potential adverse effects of CR. I studied the lethal and sublethal effects of CR angling in common carp (Cyprinus carpio; n = 43) and Eurasian perch (Perca fluviatilis; n = 36) in the wild. Carp and perch were released with acoustic transmitters into a shallow lake and equipped with a whole-lake high-resolution acoustic telemetry system. After a four-week recovery phase 9 carp and 14 perch were caught and-released at least once, monitored for six months and compared to uncaptured controls. I hypothesised that (1) directly after a CR event, reductions in relative swimming activity will occur, (2) that those changes would recover to pre-capture levels within several days, (3) that CR impacts would vary within and between species, (4) that CR events would increase the mortality risk of fish but only to a small degree given the shallow study lake, precluding barotrauma, and finally, (5) that responses to CR would be moderated by environmental effects such as water temperature and oxygen during capture and to some extent by fish total length. To investigate the behavioural impacts, I developed a novel method by modifying progressive change Before-After Change-Impact Paired-Series (BACIPS) analysis. Prolonged changes in activity for both carp and perch, on average ten and seven days respectively, in response to CR were detected, longer than previously documented. The most active fish showed the sharpest post-release activity decline and the longest recovery. Cluster analyses revealed high within-species variation in impact, from low to potentially severe. Behavioural impact severity in perch, but not carp, was driven by environmental factors during the CR event. I found no evidence for lethal effects of CR in carp or perch. Overall, my findings suggest that mortality from perch and carp angling is negligible in shallow lakes. Further, mortality should not be the only indicator of CR impacts as species that are resilient to CR mortality might show prolonged behavioural responses. Yet, these responses are not uniform across the population and vary with the behavioural type and with the environment. Guidelines should be adapted to minimize targeting highly active fish, which are both more likely to get captured and to suffer adverse effects from CR angling.