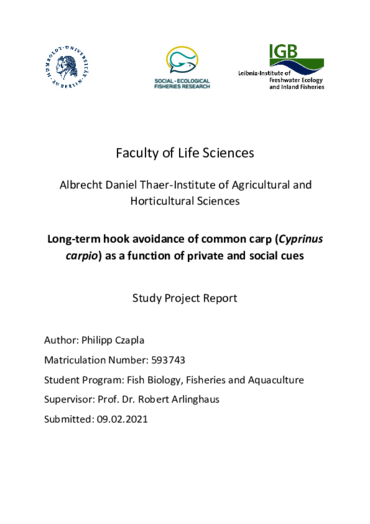 Earlier studies have shown that a one-time, private experience of hooking and releasing carp (Cyprinus carpio) can reduce individual catchability in the future. In the short term within a few days, carp can also learn from a social hooking experience that does not involve the private hooking experience and instead involves the experience of seeing a conspecific being hooked and released. It is unknown how long the hook aversion is retained in the carp’s memory. The study aim was to analyze whether private or social hooking experiences can be remembered 7 and 14 months after the experience. To that end, 76 one year old carp were either exposed to a private or social hook experience in aquariums or remained naive (control). 7 and 14 months later, the fish were exposed to a fishing situation, and their behavior in relation to the fishing bait was recorded. Corn kernels were used for fishing baited on sham rigs without a sharp hook. In comparison to angling-naïve control fish, fish from the private and social exposure both showed a reduced vulnerability to angling either after 7 or 14 months of the initial experience. Specifically, fish with a private hooking experience needed significantly more time to ingest the sham rig in comparison to controls in both time periods. Private and social carp also showed altered responses to angling hooks, being more suspicious towards a piece of corn when offered in the presence of a sham rig. Common carp are able to remember a single hooking experience for at least 14 months. These findings will influence catch rates experienced by anglers and can modify fishery-dependent stock assessments in lakes and rivers.