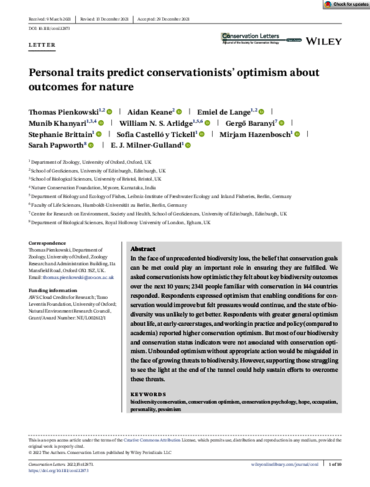 In the face of unprecedented biodiversity loss, the belief that conservation goals can be met could play an important role in ensuring they are fulfilled. We asked conservationists how optimistic they felt about key biodiversity outcomes over the next 10 years; 2341 people familiar with conservation in 144 countries responded. Respondents expressed optimism that enabling conditions for conservation would improve but felt pressures would continue, and the state of biodiversity was unlikely to get better. Respondents with greater general optimism about life, at early-career stages, andworking in practice and policy (compared to academia) reported higher conservation optimism. But most of our biodiversity and conservation status indicators were not associated with conservation optimism. Unbounded optimism without appropriate action would be misguided in the face of growing threats to biodiversity. However, supporting those struggling to see the light at the end of the tunnel could help sustain efforts to overcome these threats.