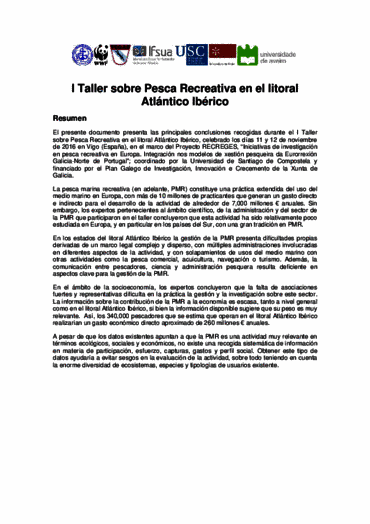 This document presents the main conclusions obtained in the 1st Workshop on Recreational Fishing on the Iberian Atlantic Coast, held on 11 and 12 November, 2016 in Vigo (Spain), within the framework of the RECREGES Project, "Research initiatives on recreational fisheries in Europe. Integration in the fisheries management models of the Galicia-Northern Portugal European Region "; coordinated by the University of Santiago de Compostela and financed by the Galician Plan for Research, Innovation and Growth of the Autonomous Government of Galicia.

Marine Recreational Fisheries (hereinafter MRF) is an activity that makes a widespread use of the marine environment in Europe, with more than 10 million practitioners and generating annually around € 7 billion in direct and indirect expenditures. However, experts from the academy, administrations and from the MRF sector who participated in the workshop concluded that this activity has been relatively little studied in Europe, and in particular in Southern countries, with a long tradition in MRF.
In the states of the Iberian Atlantic coast the management of the MRF presents difficulties derived from a complex and dispersed legal framework, with multiple administrations involved in different aspects of the activity, and overlapping uses of the marine environment with other activities such as commercial fishing, aquaculture, navigation or tourism. In addition, communication between recreational fishers, the academy and fisheries managers, is deficient in key aspects.

In the field of socioeconomics, the experts concluded that the lack of strong and representative associations in practice makes very difficult research and management actions on this sector. The information on the contribution of the MRF to the economy is scarce, both in general and in the Iberian Atlantic coast in particular, although the available information suggests that is very relevant. Thus, the 340,000 fishermen operating on the Iberian Atlantic coast would have an annual direct economic expenditure of approximately € 260 million.

Despite the available data indicate that MRF is a very relevant activity in ecological, social and economic terms, there is no systematic collection of information on participation, effort, catches, expenses and social profile. This data would help to avoid bias in the assessment of the activity, due to the huge diversity of ecosystems, species and typologies of users.