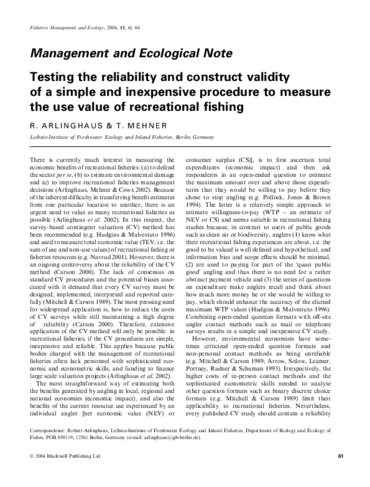 There is currently much interest in measuring the economic benefits of recreational fisheries: (a) to defend the sector per se, (b) to estimate environmental damage and (c) to improve recreational fisheries management decisions (Arlinghaus, Mehner & Cowx 2002). Because of the inherent difficulty in transferring benefit estimates from one particular location to another, there is an urgent need to value as many recreational fisheries as possible (Arlinghaus et al. 2002). In this respect, the survey-based contingent valuation (CV) method has been recommended (e.g. Hudgins & Malvestuto 1996) and used to measure total economic value (TEV; i.e. the sum of use and non-use values) of recreational fishing or fisheries resources (e.g. Navrud 2001). However, there is an ongoing controversy about the reliability of the CV method (Carson 2000). The lack of consensus on standard CV procedures and the potential biases associated with it demand that every CV survey must be designed, implemented, interpreted and reported carefully (Mitchell & Carson 1989). The most pressing need for widespread application is, how to reduce the costsof CV surveys while still maintaining a high degree of reliability (Carson 2000). Therefore, extensive application of the CV method will only be possible in recreational fisheries, if the CV procedures are simple, inexpensive and reliable. This applies because public bodies charged with the management of recreational fisheries often lack personnel with sophisticated economicand econometric skills, and funding to finance large scale valuation projects (Arlinghaus et al. 2002).

Arlinghaus, R., Mehner, T. (2004). Testing the reliability and construct validity of a simple and inexpensive procedure to measure the use value of recreational fishing. Fisheries Management and Ecology, 11, 61-64