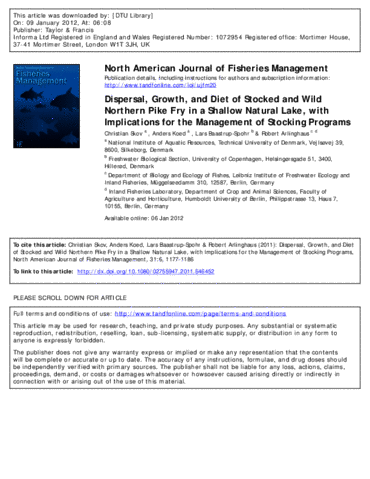 Increasing evidence suggests that stocking northern pike Esox lucius has had limited success, especially when age-0 fish are stocked into water bodies where the recruitment of northern pike already occurs. To better understand the ecology of wild and stocked fry, we investigated the dispersal, growth, and food composition of advanced pike fry (∼30 mm) stocked at a high density at a common release site in a shallow natural lake that contained wild young of-the-year (age-0) pike. The stocked pike fry colonized the entire lake shoreline within just a few days. Dispersal was inversely related to size at stocking, suggesting that smaller fish were displaced by competitively superior larger individuals. While the stocked pike were initially larger than the wild age-0 pike, suboptimal growth was evident among the stocked pike and they were smaller than the wild ones at the end of the growing season. Stomach analyses revealed that the stocked pike ingested less diverse prey items and had higher fractions of empty stomachs throughout the study period. Overall, the fraction of stocked pike in samples rapidly declined over the season, which may have been caused by differential survival or immigration into or emigration out of the study system. Our study adds to the existing literature suggesting that the stocking of age-0 northern pike into waters with naturally reproducing pike populations will result in limited success. We propose two potentially complementary explanations for the apparent low fitness of stocked individuals in competition with wild conspecifics: (1) genetic-based local maladaptation among the stocked fish and (2) carryover effects from the hatchery. The latter may be less likely because the fry stocked were the offspring of wild fish and only spent a few weeks in the hatchery.