An important element for the protection of biodiversity is the willingness of the public to support restoration efforts. Using a longitudinal survey design with 1,000 respondents each in Germany, France, Norway and Sweden, scientists led by the Leibniz Institute of Freshwater Ecology and Inland Fisheries (IGB) investigated which values, beliefs and norms promote conservation-oriented behaviour toward native fishes in rivers. The study shows: Germans have little connection to fish. Rather, the protection of fish in this country is supported by general pro-ecological values and norms. In France, Sweden and Norway, on the other hand, native fish species have great influence on individual conservation-oriented behaviour. The results explain why some countries make higher investments in fish species conservation and why fish-related issues are differently represented in political discourse. 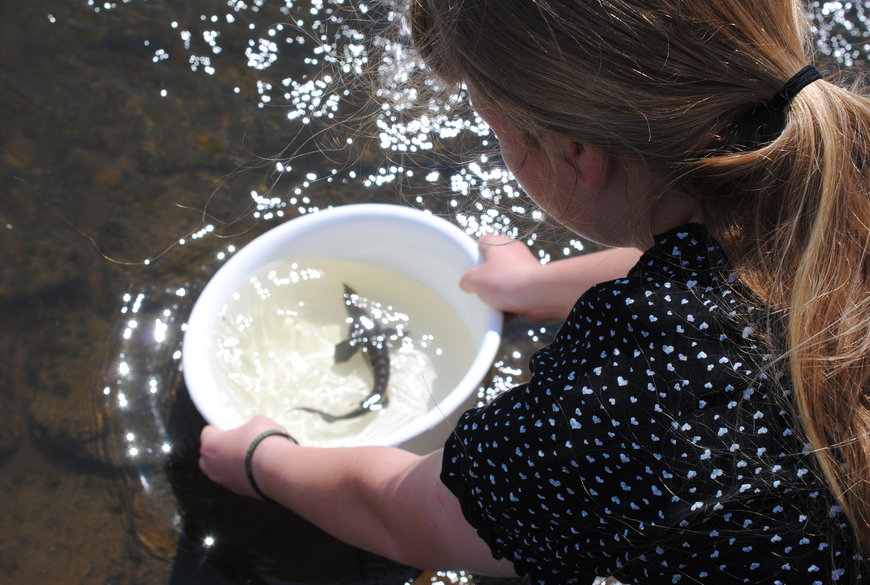 In Germany, France, Norway and Sweden, people have a different relationship to fish. Photo: Winfried Mausolf

Freshwater ecosystems are home to about one third of all vertebrate species and 43 percent of all fish species worldwide. In Europe, more than 40 percent of native freshwater fish are threatened or already extinct: River regulation, hydropower and damming, pollution, climate change, invasive species and, to some extent, overfishing are the main causes. So it depends on our actions how water bodies and fish species develop. To better protect rivers and fish stocks, citizens have to be convinced. But not every argument works: As this study shows, it is important to consider the cultural context within which the public perceives and reacts to threats to biodiversity.

Researchers from the IGB and the Humboldt Universität zu Berlin, together with international partners, applied the value-belief-norm theory from conservation psychology to investigate what environmentally friendly behaviour depends on, using the example of fish species protection. Dr. Carsten Riepe, first author of the publication in the scientific journal Society and Natural Resources, emphasised: "The unique approach of our study is that we did not only look at behavioural intentions, but also surveyed actual behaviour in natural settings, for example people's willingness to make monetary donations that benefit fish species conservation in rivers. This increases the significance of our survey enormously."

Respondents in the four countries showed similar environmental beliefs, attitudes and norms. For example, basic ecological values and the conservation of biodiversity in and around rivers were important to the majority of all respondents. The majority even tended to feel morally obliged to mitigate threats to the decline of fish species diversity in rivers.

However, there were also some relevant differences in the four countries: The survey results from Norway, but also from Sweden and France, indicate a higher attachment to fish and the aquatic environment. In these three countries, the protection of native fish species was a particularly important determinant of conservation-oriented behaviour. In Germany, on the other hand, the general ecological context was more crucial. In comparison to the other three countries, Germans showed little connection to fish and the aquatic environment.

"The four study countries differ in their fish communities and the status of their freshwaters. There are also cultural, recreational and socio-economic differences. These factors influence conservation-oriented thoughts and behaviours in relation to fish species conservation. The results explain why some countries make higher investments in fish conservation, why fish-related issues appear differently in political discourse and why there are differences in the societal importance and perception of fish and fisheries between European countries," explained project leader Professor Dr Robert Arlinghaus from IGB.

From the results, the researchers derived insights for effective environmental education and intervention campaigns. Effective information and education measures – for example initiated by the government or by non-governmental conservation organisations – need an argumentative framework that strikes a chord with the addressees: "One promising way is to embed the core message of an information campaign in a narrative that makes country-specific references to the way the environment is perceived. While topics and facts about wild salmon or brown trout excite people in Norway and Sweden, Germans are more likely to be reached with general topics such as water quality or threats to biodiversity as a whole," Carsten Riepe summarised the practical conclusions of the study for environmental education and communication.

We are devoted to produce robust insights and recommendations for sustainable recreational fisheries. We take an inter- and transdisciplinary research approach, conceptualising recreational fisheries as coupled social-ecological system. We built bridges among fisheries ecology, behavioural ecology, fisheries evolution and applied social and economic studies, and study angler attitudes and behaviours in addition to fish population dynamics, fish behavioural ecology and fisheries evolution. Our practically oriented research is based on profound theoretical and analytical frameworks, employing both empirical and modelling approaches in both laboratories and field settings. We cooperate with a range of leading universities and groups in Germany and abroad. The stakeholders we work with include angling clubs, angler associations, fisheries agencies and the Food and Agricultural Organization of the United Nations.