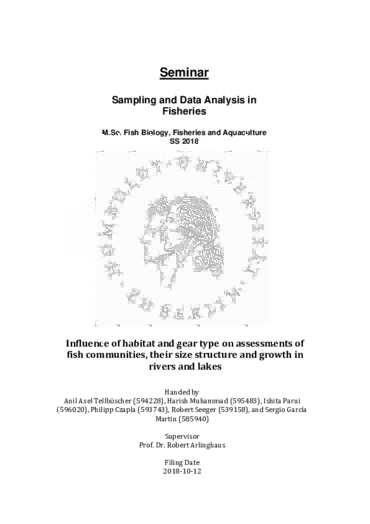 Parameters like water quality and the morphology of rivers and lakes are often seen as key variables determining their fish assemblages. The influence of habitat diversity is meanwhile often underestimated in recent studies because of the high structure complexity within these habitats. This study was therefore conducted to improve the knowledge about habitat requirements of specific fish communities in lakes and rivers and the accuracy of different sampling strategies (gillnet vs. electrofishing and electro fishing transect vs. point abundance sampling). In River Spree, eurytopic and phyto-limnophilic generalists dominated both main channel and backwater, but significant differences in terms of length and weight were found. Some fish species were exclusively found in one mesohabitat, indicating the importance of habitat diversity for a diverse fish assemblage. The structure complexity within the littoral zone of two examined gravel pits in Lower Saxony had as well a high impact on the fish community. As expected with a higher degree of complexity, the mean NPUE in total increased and was highest in reedy and wooden structures compared to structureless habitats. The smallest average size and the highest mean NPUE of perch (Perca fluviatilis) was found in woody mosaic structures compared to fully structured habitats with reed or without structure. Rudd (Scardinius erythrophthalmus) had a strong preference towards reedy habitats, which was also indicated by detecting the highest densities of small rudd in reed. Habitats, with a low percentage of artificial deadwood (< 30%), had the highest mean NPUE in total and were dominated by rudd, but this was not significant. Furthermore, perch was significantly positive correlated to the percentage of artificial deadwood. The structure of fish communities and their habitat preferences, which were detectable with transect based electrofishing were in accordance to the findings of the electro-fished point abundance sampling. Because of the high diversity of habitats, one sampling method is not enough and would produce bias. It is better to combine active gear (e.g. electrofishing) and passive gear (gill net) that will increase the probability to obtain a more representative sample. The results were as expected, the fish caught in gill net were relatively bigger and better condition than the fish caught by electrofishing. The Eurasian Perch (Perca fluviatilis), as a model to estimate growth population level, sampled by gillnetting were on average larger, better conditioned, and faster-growing than the Perch caught by electrofishing.

Tellbüscher, A. A., Muhammad, H., Parui, I., Czapla, P., Seeger, R., Martin, S. G. (2018). Influence of habitat and gear type on assessments of fish communities, their size structure and growth in rivers and lakes. Report, Sampling and data analysis in fisheries, pp. 114