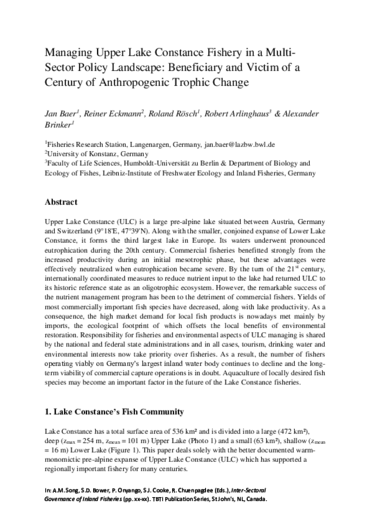 Upper Lake Constance (ULC) is a large pre-alpine lake situated between Austria, Germany and Switzerland (9°18'E, 47°39'N). Along with the smaller, conjoined expanse of Lower Lake Constance, it forms the third largest lake in Europe. Its waters underwent pronounced eutrophication during the 20th century. Commercial fisheries benefitted strongly from the increased productivity during an initial mesotrophic phase, but these advantages were effectively neutralized when eutrophication became severe. By the turn of the 21st century, internationally coordinated measures to reduce nutrient input to the lake had returned ULC to its historic reference state as an oligotrophic ecosystem. However, the remarkable success of the nutrient management program has been to the detriment of commercial fishers. Yields of most commercially important fish species have decreased, along with lake productivity. As a consequence, the high market demand for local fish products is nowadays met mainly by imports, the ecological footprint of which offsets the local benefits of environmental restoration. Responsibility for fisheries and environmental aspects of ULC managing is shared by the national and federal state administrations and in all cases, tourism, drinking water and environmental interests now take priority over fisheries. As a result, the number of fishers operating viably on Germany’s largest inland water body continues to decline and the long-term viability of commercial capture operations is in doubt. Aquaculture of locally desired fish species may become an important factor in the future of the Lake Constance fisheries.

For more, here is the link for the whole E-Book