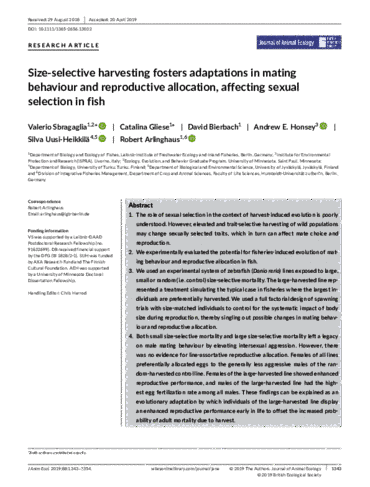 1. The role of sexual selection in the context of harvest‐induced evolution is poorly understood. However, elevated and trait‐selective harvesting of wild populations may change sexually selected traits, which in turn can affect mate choice and reproduction.

2. We experimentally evaluated the potential for fisheries‐induced evolution of mating behaviour and reproductive allocation in fish.

3. We used an experimental system of zebrafish (Danio rerio) lines exposed to large, small or random (i.e. control) size‐selective mortality. The large‐harvested line represented a treatment simulating the typical case in fisheries where the largest individuals are preferentially harvested. We used a full factorial design of spawning trials with size‐matched individuals to control for the systematic impact of bodysize during reproduction, thereby singling out possible changes in mating behaviour and reproductive allocation.

5. Our results suggest that the large‐harvested line evolved behaviourally mediated reproductive adaptations that could increase the rate of recovery when populations adapted to high fishing pressure come into secondary contact with other populations.