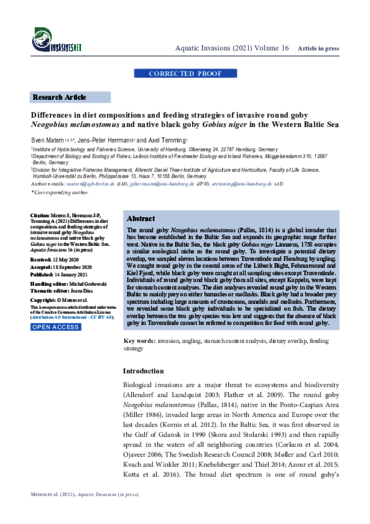 The round goby Neogobius melanostomus (Pallas, 1814) is a global invader that has become established in the Baltic Sea and expands its geographic range further west. Native in the Baltic Sea, the black goby Gobius niger Linnaeus, 1758 occupies a similar ecological niche as the round goby. To investigate a potential dietary overlap, we sampled eleven locations between Travemünde and Flensburg by angling. We caught round goby in the coastal areas of the Lübeck Bight, Fehmarnsund and Kiel Fjord, while black goby were caught at all sampling sites except Travemünde. Individuals of round goby and black goby from all sites, except Kappeln, were kept for stomach content analyses. The diet analyses revealed round goby in the Western Baltic to mainly prey on either barnacles or mollusks. Black goby had a broader prey spectrum including large amounts of crustaceans, annelids and mollusks. Furthermore, we revealed some black goby individuals to be specialized on fish. The dietary overlap between the two goby species was low and suggests that the absence of black goby in Travemünde cannot be referred to competition for food with round goby.