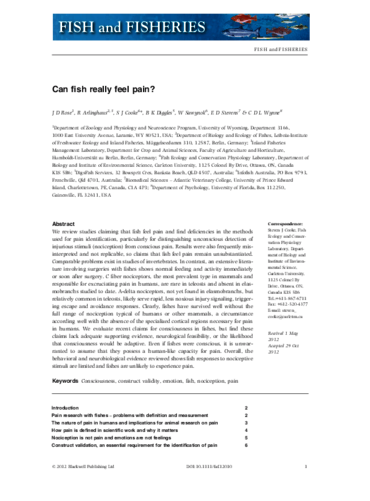 We review studies claiming that fish feel pain and find deficiencies in the methods used for pain identification, particularly for distinguishing unconscious detection of injurious stimuli (nociception) from conscious pain. Results were also frequently misinterpreted and not replicable, so claims that fish feel pain remain unsubstantiated. Comparable problems exist in studies of invertebrates. In contrast, an extensive literature involving surgeries with fishes shows normal feeding and activity immediately or soon after surgery. C fiber nociceptors, the most prevalent type in mammals and responsible for excruciating pain in humans, are rare in teleosts and absent in elasmobranchs studied to date. A-delta nociceptors, not yet found in elasmobranchs, but relatively common in teleosts, likely serve rapid, less noxious injury signaling, triggering escape and avoidance responses. Clearly, fishes have survived well without the full range of nociception typical of humans or other mammals, a circumstance according well with the absence of the specialized cortical regions necessary for pain in humans. We evaluate recent claims for consciousness in fishes, but find these claims lack adequate supporting evidence, neurological feasibility, or the likelihood that consciousness would be adaptive. Even if fishes were conscious, it is unwarranted to assume that they possess a human-like capacity for pain. Overall, the behavioral and neurobiological evidence reviewed shows fish responses to nociceptive stimuli are limited and fishes are unlikely to experience pain.